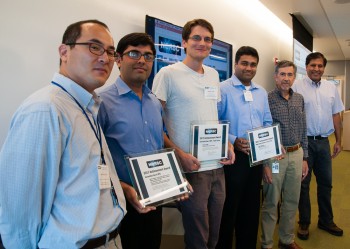 The awards recognize NERSC users who have either demonstrated an innovative use of HPC resources to solve a scientific problem or whose work has had an exceptional impact on scientific understanding or society. To encourage younger scientists who are using HPC in their research, NERSC also features two early career awards.

A team of researchers from Lawrence Berkeley National Laboratory, University of California Berkeley and Caltech was honored in this category for using NERSC resources to speed up the discovery of commercially viable materials that can be used to produce solar fuels. The group gathered a list of potentially useful compounds and then were able to rapidly screen and test the best materials with NERSC. This process would normally take an immense amount of time to conduct all the tests and experiments by hand. The researchers were able to go through 174 compounds containing vanadium and oxygen, called vanadates, and were able to identify 12 useful materials. These materials will be very useful for developing solar fuels, which are a clean and renewable alternative to fossil fuels. The work was led by Berkeley Lab's Jeff Neaton, John Gregoire and Qimin Yan. Other members of the team were Jie Yu, Santosh Suram, Lan Zhou, Aniketa Shinde, Paul Newhouse, Wei Chen, Guo Li and Kristin A. Persson.

Badri Narayanan, a scientist from Argonne National Laboratory, is being honored for developing atomistic models to understand reactive interfaces of energy applications. He ran simulations on NERSC’s Edison system to study how diamond-like carbon tribofilms worked on the molecular scale. With these simulations he was able to discover that the metal catalysts in the nanocomposite coatings broke down the hydrocarbon chains into smaller ones and then rearranged them to form the tribofilm. His findings helped open up a new field called “tribocatalysis” that could revolutionize the study of lubricants.

2017 NERSC Award for Innovative Use of HPC

A team led by Abhinav Bhatele of Lawrence Livermore National Laboratory is being honored for using NERSC resources to determine the scaling for a realistic simulation of an infectious disease on the national level. To predict how much processing power these simulations would take, the team ran experiments on various supercomputers, including NERSC’s Cori system, using the EpiSimdemics simulator. This study will help future scientists predict and contain the spread of infectious diseases on the national scale. The other team members were Jae-Seung Yeom, Nikhil Jain, Chris Kuhlman, Yarden Livnat, Keith Bisset, Laxmikant Kale and Madhav Marathe.

2017 NERSC Award for Innovative Use of HPC – Early Career

Thomas Heller of the Friedrich Alexander University Nuremberg is being honored in this category for his work with simulations of merging stars--notably “for demonstrating that an asynchronous massively parallel tasking runtime system can be used to harness billions of tasks for a scalable hydrodynamics simulation of the merger of two stars.” He was nominated for using OctoTiger, an adaptive mesh refinement program based on HPX (an asynchronous, massively parallel tasking runtime system) to perform full system runs on NERSC’s Cori KNL system. He proved that these are powerful programs that could be used to assist large-scale tasks such as gathering information from a simulation of merging stars.