In tihs photo from the early days of NERSC at Berkeley Lab, William Harris poses wtih the Cray J90s, the first computers installed at NERSC's new home in Berkeley.

When NERSC moved from Lawrence Livermore to Berkeley Lab in 1996, Harris was one of the key LLNL employees who also made the move. He created the operations support group, which he led until he retired on Jan. 30, 2003.

"We were extremely fortunate that William decided to make the transition, bringing with him his leadership skills, his technical expertise and his organizational knowledge," said Berkeley Lab Deputy Director Horst Simon, who was the first director of NERSC at Berkeley Lab. “He kept his team together and assured stability of operations in a turbulent transition. He was dedicated to mentoring junior staff and fostered diversity, long before the rest of the industry recognized its importance. What a sad day for NERSC, Berkeley Lab, and HPC. We have lost one of our pioneers.”

Once NERSC was established at Berkeley Lab, Harris sponsored a weekly donut get-together, spreading out dozens of goodies in front of the computing center on the first floor of Bldg. 50B. He was also known for his love of cooking – each December he cooked up a giant recipe of gumbo and the aroma wafted up the 50B stairwells starting early in the morning, reminding staff of the gumbo feed. Fittingly, his retirement was celebrated with a festive barbecue at the Oakland Scientific Facility. 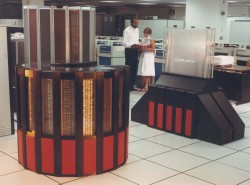 William Harris and a colleague with a Cray 2 supercomputer at the National Magnetic Fusion Energy Computer Center (now NERSC) at LLNL.

After he went to work at LLNL in 1971, Harris spent his entire career in computer operations, and joined the NERSC Center staff in 1984 when it was known as the Magnetic Fusion Energy (MFE) Computer Center. Harris joined LLNL after eight years as a communications computer crypto specialist in the U.S. Air Force.

In lieu of flowers, donations may be made to CaringBridge.org