Joachim Frank, a NERSC PI from 2004-2006, pioneered the computational methods needed to reconstruct the 3D shape of biomolecules from thousands of 2D images obtained using Cryo-EM.

The 2017 Nobel Prize in Chemistry was awarded October 4 to three scientists central to the development of cryo-electron microscopy (Cryo-EM), a technique used to reveal the structures of large organic molecules at high resolution.

Jacques Dubochet of the University of Lausanne, Switzerland, Joachim Frank of Columbia University and Richard Henderson of the MRC Laboratory of Molecular Biology were honored for their role in “developing cryo-electron microscopy for the high-resolution structure determination of biomolecules in solution.” Cryo-electron microscopy allows researchers to freeze biomolecules mid-movement and visualize their molecular processes that carry essential processes inside cells.

One of the laureates—Frank—pioneered the computational methods needed to reconstruct the 3D shape of biomolecules from thousands of 2D images obtained from Cryo-EM, methods employed today by most structural biologists who use electron microscopy. The SPIDER (System for Processing Image Data from Electron Microscopy and Related fields) software package Frank helped develop was for many years one of the most widely used for carrying out single-particle image 3D reconstruction of macromolecular assemblies from Cryo-EM image data. 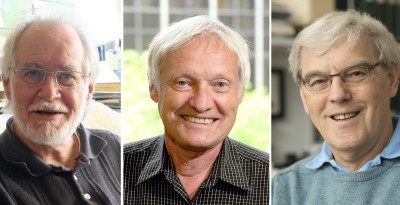 “Using the single-particle reconstruction technique, Cryo-EM maps have provided valuable visualizations of ribosome binding with numerous factors,” Frank noted in his 2006 ERCAP request to NERSC. “Thus, so far, Cryo-EM has been the only means to visualize the ribosome in its functional states.”

Frank’s work at NERSC and the computational methodology supporting it were highlighted in two 2007 publications: a paper in the Proceedings of the National Academy of Sciences co-authored with Wen Li, also a NERSC user, and another in the Journal of Structural Biology that included two co-authors from Berkeley Lab’s Computational Research Division (CRD): Chao Yang and Esmond Ng. CRD’s contributions to this research included improving algorithms and their parallel implementations to determine the orientation of the 2D images and continually refine the construction of the 3D model from these images.

For more on Berkeley Lab’s contributions to Cryo-EM: