Francesca Verdier, currently NERSC’s allocations manager, has been managing user services at high performance computing facilities since 1990. She joined NERSC in 1996 as part of the center’s massive hiring effort after relocating from Lawrence Livermore National Laboratory to Lawrence Berkeley National Laboratory. After 19 years at NERSC, she is retiring in June 2015.

Prior to overseeing NERSC allocations, Verdier first built up and then led the center’s User Services Group, where she established procedures to manage the consulting help desk, online information systems, training programs and the installation and maintenance of third-party and locally written software. She has always emphasized the importance of obtaining user feedback, whether by online web surveys, e-mail surveys or personal phone calls.

Several years ago, Verdier launched a noon-hour exercise program for NERSC staff, turning the stairways into fitness centers. She also rides her bike to work from her home in downtown Berkeley, a habit she developed in her undergraduate days at McGill University in Montreal.

“I’ve been riding my bike to work and school since the 1970s,” she said. “At that time I was intrepid and even bicycled—over Mount Royal—in the snow. I am less daring now and prefer to find windows of opportunity between rain showers, but still get caught in the rain at times.” 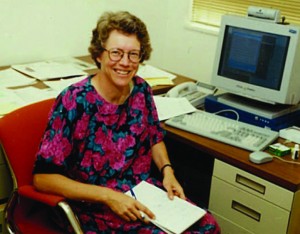 Here Verdier, whose last official day is June 29, talks about her early days in programming, what led her to NERSC and what she considers some of her proudest accomplishments.

How did you first become involved in HPC?

I took a PL/1 course while pursuing a master's degree in city planning at Cornell University and loved the language. It was so much better than Fortran for string manipulations. That led to programming jobs at Cornell and eventually to my first HPC job, in 1986, at the Cornell Theory Center, one of the National Science Foundation’s original HPC centers.

What attracted you to working at NERSC?

Mostly the ability to stay in HPC after I had temporarily left this sector to accompany my husband to Hong Kong, where I taught English to the locals for the eight months we were there. Plus the West Coast location—I was living in Oregon when I applied.

What’s been your favorite part of working at NERSC?

Helping and interacting with the scientists who use NERSC. Trying to assess and meet their needs, and advocating for them.

What were some of the challenges in starting a new user services group?

The biggest challenge was that there were only a handful of consultants when I started, so I had to work as a consultant and also do all the job postings, interviews and hiring. It was a hectic, but fun, time. Luckily I had templates for how to run things from my experience at the Cornell Theory Center and NASA Goddard.

What are some of your proudest accomplishments in your nearly 20 years at NERSC?

1. Implementing the User Services framework when I first came to NERSC.
2. Getting (former NERSC General Manager) Bill Kramer to agree to change the queuing parameters on Seaborg. This took six months of using data to show that under current policies smaller jobs could only run as background jobs.
3. Organizing the Nobel Lecture Series for NERSC's 40th anniversary in 2014.

What will you miss most after you leave the center?

Interacting with the scientists and the DOE allocation managers, and running the yearly repo report in NIM.

What are your plans for the future? Will you continue to be involved with NERSC or the Lab?

I already do a lot of hiking trail maintenance, and being retired will allow me to take week-long—and longer—trail maintenance trips. I also plan to visit my daughter who is in college in San Luis Obispo and family on the East Coast more often. And I intend to keep my staff role in NIM and IM and continue to run those NIM reports, at least in the near future. I may also try to get to NERSC once a week (when in town) for the noon exercise session.

If you had once piece of advice to share with your colleagues, what would it be?

Remember that science is first.