When the new Shyh Wang Hall building at Lawrence Berkeley National Laboratory (Berkeley Lab) is officially unveiled November 12, one of its most unique features will not be on display. In fact, it is tucked away beneath the floor of the new 20,000 square foot machine room, keeping the Computing Sciences group’s supercomputers, servers and staff safe from harm during an earthquake.

The San Francisco Bay Area is well known to be a seismically active area. Wang Hall (also known as the Computational Research and Theory facility) was thus designed to include a custom-built seismically isolated floor to protect the computer systems and personnel. The unique floor is the brainchild of Dynamic Isolation Systems (DIS), a pioneer in the development of seismic isolation technology. DIS has provided more than 20,000 isolators for more than 400 bridges and buildings worldwide, including the SLAC linear accelerator at Stanford University, San Francisco City Hall, Oakland City hall and the Golden Gate, Bay and Richmond/San Rafael bridges.

“Wang Hall’s seismically isolated floor protects the supercomputers from damage by decoupling them from the floor slab below,” explained Konrad Eriksen, president of DIS. “This prevents high seismic forces from being transmitted into the computers.”

Data centers typically feature a raised access floor system in the machine rooms to provide flexibility in wiring, hardware location and air distribution. The design isolates data lines, power cables and piping to create a safe environment for operators and to protect hardware operations. Due to Berkeley Lab’s proximity to the nearby Hayward Fault, the new Wang Hall design takes the raised floor concept a bit further. While the computer cabinets sit on a conventional raised floor, the floor is mounted on a steel substructure that rolls on casters and utilizes a sophisticated spring dampening mechanism. 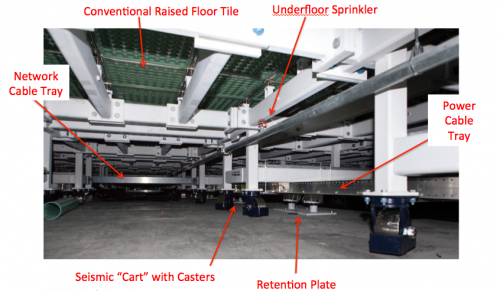 The raised floor rides on a rolling substructure with a spring dampening mechanism.

“While based on an earlier system developed by DIS for containerized data centers, the isolated floor in Wang Hall is a first-of-a-kind design,” said Jeff Broughton, deputy for operations and systems department head at NERSC, who has been overseeing the project. “The floor structure is designed to handle a maximum credible event occurring on the nearby Hayward Fault.”

The basic component of the floor is known as a “module.” Multiple modules are joined by steel beams to construct the floor, with six feet of space separating the modules on all sides. Steel plates span the gap between the isolated floor and the surrounding fixed floor; these plates are attached to the seismic floor only and are able to slide over the fixed floor. Cooling water is fed from fixed pipes located between the modules and attached to the systems via flexible hoses. All other utilities (such as power, networking, smoke detection and sprinklers) are suspended from the substructure and connected to the building proper by flexible connections that can accommodate 18 inches of movement. 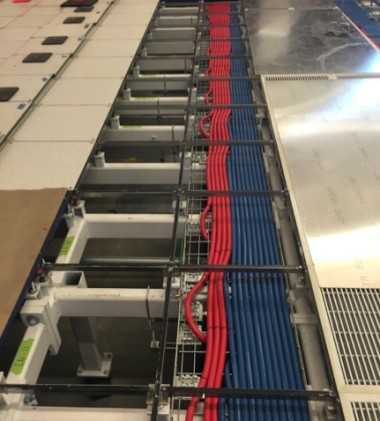 “With the seismic floor, we had to think about how utilities would be distributed in advance, and the result is a much cleaner and neater design than most data centers,” Broughton said.

Prior to installing the seismic floor in Wang Hall, DIS conducted at-scale testing of the design at the University of California, Berkeley Pacific Earthquake Engineering Research Center, home to the largest 3D shake table in the U.S. A test structure was run through three days of testing equivalent to approximately 3,000 years of earthquakes.

“Doing this first-of-its-kind installation, it was critical to validate the design,” Broughton said. “A lot was learned about the way the system worked for asymmetric floor loadings and about the performance of the racks.”

Dynamic Isolation Systems is a pioneer in the development and introduction of seismic isolation technology. Over the past 30 years the company has provided more than 20,000 isolators for more than 400 bridges and buildings in 19 countries worldwide. Prominent local projects include the Golden Gate Bridge, San Francisco City Hall, Oakland City Hall and the new Van Ness Geary Medical Center (VNGMC).

In recent years DIS has developed new products to protect equipment such as Berkeley Lab’s supercomputers. This technology is also being used to protect equipment on hydroelectric dams in Canada. The VNGMC uses viscous wall dampers that DIS introduced from Japan and modified to comply with U.S. codes.