Research supported by NERSC is being honored by end-of-year reviews in two leading magazines: Physics World and WIRED. The IceCube South Pole Neutrino Observatory was notably named to both lists, being honored as the most important discovery by Physics World.

Three of Physics World's top 10 breakthroughs of 2013 went to discoveries that used NERSC resources. In addition to the IceCube South Pole Neutrino Observatory's top honor, "breakthrough of the year," the magazine named the European Space Agency's European Planck space telescope, which revealed new information about the age and composition of the universe; and the South Pole Telescope, which made the first detection of a subtle twist in light from the CMB, known as B-mode polarization.

WIRED magazine's Top Science Discoveries of 2013 named two findings NERSC had a hand in, including IceCube and the final findings of the NASA Kepler space telescope: One in five Sun-like stars in our galaxy has an Earth-sized planet orbiting it at a habitable distance. 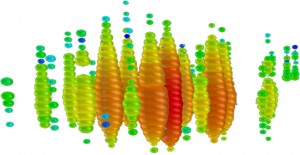 This event display shows “Bert,” one of two neutrino events discovered at IceCube whose energies exceeded one petaelectronvolt (PeV). The colors show when the light arrived, with reds being the earliest, succeeded by yellows, greens and blues. The size of the circle indicates the number of photons observed. (Courtesy of the IceCube Collaboration)

The magazine’s “Breakthrough of the Year” honor went to the IceCube South Pole Neutrino Observatory for making the first observations of high-energy cosmic neutrinos—particles that originate from far beyond the solar system. Neutrinos are notoriously difficult to detect, and IceCube achieved this result by building a colossal detector deep under the ice at the South Pole. The observatory can also determine the neutrino's direction, making it an incredibly useful telescope.

In November 2013, the IceCube Collaboration publicly announced the observation of 28 extremely high-energy events that constitute the first solid evidence for high-energy astrophysical neutrinos from outside our solar system. These 28 events include two of the highest energy neutrinos ever reported, which have been named “Bert” and “Ernie.” Published in Science, the results provide experimental confirmation that something is accelerating particles to energies above 50 trillion electron volts (TeV) and, in the cases of Bert and Ernie, exceeding one quadrillion electron volts (PeV). By comparison, the LHC accelerates protons to approximately four TeV in each of its beams.

In analyzing more recent data, Lisa Gerhardt, who at the time of her discovery was with Berkeley Lab’s Nuclear Science Division and is now with NERSC, discovered another event that was almost double the energy of Bert and Ernie. Spencer Klein, a senior scientist with Berkeley Lab, presented this new event—dubbed “Big Bird”—at the July 2013 International Cosmic-Ray Conference. The team used NERSC supercomputing resources, located at Berkeley Lab, to sift out neutrino signals from cosmic “noise” in the IceCube observations.

“The large amount of computing resources at NERSC allowed me to set up my simulations and run them right away, which was essential to finding this neutrino event in a timely manner,” says Gerhardt.

While not telling scientists what cosmic accelerators are or where they’re located, the IceCube results do provide them with a compass that can help guide them to the answers. 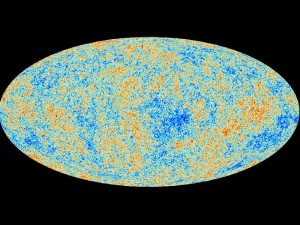 This map shows the oldest light in our universe, as detected with the greatest precision yet by the Planck mission. The ancient light, called the cosmic microwave background, was imprinted on the sky when the universe was 370,000 years old. (Image credit: ESA and the Planck Collaboration)

The European Space Agency’s European Planck space telescope also made this year’s Physics World breakthroughs list for producing the most precise measurement ever of the cosmic microwave background (CMB) radiation. Written in light shortly after the big bang, the CMB is a faint glow that permeates the cosmos.

CMB surveys are complex and subtle undertakings, and NERSC supercomputers were crucial to sifting the CMB’s faint signal out of a noisy universe and decoding its meaning. Using NERSC resources, Planck scientists created the most detailed and accurate maps yet of the relic radiation from the big bang.

“CMB data sets grow with Moore’s Law, increasing a thousand-fold over the last 15 years and projected to do the same over the next 15 too,” says Julian Borrill, a Planck scientist and co-founder of the Computational Cosmology Center (C3) at Berkeley Lab. His group has been developing the supercomputing tools needed to analyse the big data from CMB experiments for over a decade.

“These maps are proving to be a goldmine containing stunning confirmations and new puzzles,” says Martin White, a Planck scientist and physicist with University of California Berkeley and at Berkeley Lab. “This data will form the cornerstone of our cosmological model for decades to come and spur new directions in research.” 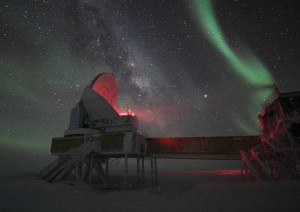 The IceCube collaboration may have bagged the Physics World 2013 Breakthrough of the year award, but another discovery from the South Pole also made Physics World top-10 list. This year, the South Pole Telescope made the first detection of a subtle twist in light from the CMB, known as B-mode polarization. This twist has long been predicted and its detection paves the way for a definitive test of inflation – a key theory in the Big Bang model of the universe.

The South Pole Telescope team used NERSC resources through an allocation shared by a dozen suborbital CMB experiments, including data analysis on the Hopper and Edison supercomputers and archiving on the high performance storage system HPSS.

More: Subtle Distortions May Reveal Clues To The Early Universe 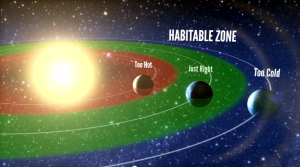 A data analysis pipeline run on supercomputers at NERSC found a profusion of potentially Earth-like planets in our own galactic neighborhood. (Image: NASA)

Earth-like Planets Not Uncommon in Our Galaxy

One out of every five Sun-like stars in our Milky Way galaxy has an Earth-sized planet orbiting it in the Goldilocks zone—not too hot, not too cold—where surface temperatures should be compatible with liquid water, according to a statistical analysis of data from NASA’s Kepler spacecraft by Erik Petigura, a graduate student at the University of California, Berkeley (UC Berkeley).

Petigura and his colleague Andrew Howard, now at the University of Hawaii, Manoa, spent three years developing a transit search pipeline called TERRA, which is optimized for finding small planets. When they used this tool on supercomputers at NERSC to analyze nearly four years of Kepler observations, the scientists determined that our galaxy could contain as many as 40 billion habitable Earth-sized planets.

More: Are Earths Rare? Perhaps Not.