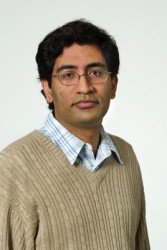 Jay Srinivasan has been selected as the Computational Systems Group Lead in the NERSC Systems Department. In this role, he will supervise the day-to-day operation of all of NERSC's computer systems. Prior to taking on his new assignment, Srinivasan was the team lead for the PDSF cluster that supports Nuclear Physics and High Energy Physics.

Srinivasan has more than 15 years of experience in high performance computing, both as a user and administrator. Since joining NERSC in 2001, he has worked on all the large systems from NERSC-3, the IBM/SP2 system called Seaborg, to Hopper, the Cray XE6 that is currently NERSC’s flagship supercomputing. Srinivasan was also the system lead for the Jacquard system.

Before joining NERSC, Srinivasan worked at the Supercomputing Institute at the University of Minnesota, where he received his Ph.D. in chemical physics in 1999.