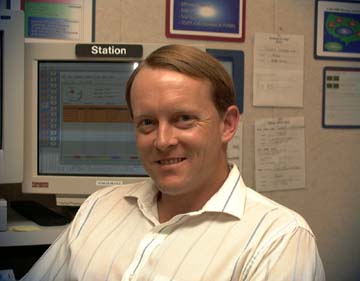 Steve Lowe in his "office," the NERSC control room.

During his combined 29 years at Lawrence Livermore and Lawrence Berkeley national labs, Steve Lowe has worked with some of the most powerful computing machinery anywhere. And when he isn’t at work, there aren’t many things he’d rather do than figure out a way to squeeze more performance out of a muscle car like a Chevy Camaro or Pontiac Firebird.

But come Jan. 3, he’ll trade in his career and home in Tracy for a new lifestyle – retiring and spending a few years exploring North America with his wife in an RV. It was his under-the-hood expertise that led him to working on his dad’s RV for 10 years and the idea grew on him. So, in April, Lowe and his wife will pack their things into the 40-foot home on wheels and head north to Alaska.

“It’s our great adventure – we’ll only have about two months of good weather in Alaska so we’ll follow the standard loop to Fairbanks, Anchorage, Denali and then back to Canada,” Lowe said. “Then we’ll head to Arizona – our plan is to follow the weather.”

He admits it will be a big change as their longest RV trip to date has been to Crater Lake in Oregon. But after living most of his life in the Bay Area, Lowe says he’s ready to look around at other states and see if there’s a better place to retire. Being on the move has been a hallmark of his career at the labs – working on the operations side of computing has meant he’s never had a real office of his own.

As the current head of NERSC’s Computer Operations and ESnet Support Group, Lowe spends most of his time in the control room on the machine room floor of the Oakland Scientific Facility. From there, he and his team have a panoramic view of the hardware and banks of monitors to show them what’s happening inside the computers and all along ESnet’s national network infrastructure.

“We’re responsible for monitoring and basic troubleshooting for the large NERSC systems and ESnet,” said Lowe, who was named group lead in 2004 to succeed William Harris. “Often we’re the initial point of contact between NERSC users and the groups in the Services Department.” 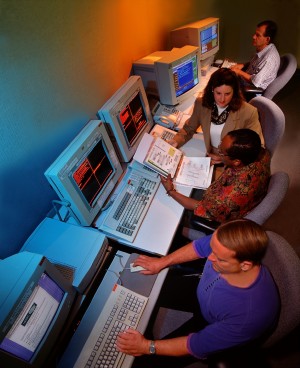 When NERSC first moved to Berkeley Lab, Steve Lowe (bottom) was featured in a number of promotional photos of the new center. Others are William Harris, Roberta Boucher and Bob Vargas.

Because NERSC has users around the world, requests for help don’t always fall within the usual workday, so the control room is staffed 24x7. Staff can help with user passwordss and reset failed logins, as well as making sure the systems are up and running. “If something breaks, we work with vendors, the system engineers and NERSC support to get it back up as quickly as possible,” Lowe said.

Lowe himself prefers the swing shift, coming in later in the afternoon and staying until most others have gone home. The hours ease his commute from Tracy, but he said it’s also a benefit of having a manager onsite after hours. “I like the variety,” he said of his job. “You hardly ever walk in and find everything is slow.”

Lowe didn’t plan to have a career in computer operations. When he took an aptitude test for the military in high school, he showed a talent for computer repair.

“I’ve always found computers and cars interesting – I love everything mechanical,” he said. “Anything that requires troubleshooting or logical thinking, I like it.”

But when he joined the Air Force, the only open computer jobs were in operations, so he took the opportunity to get his foot in the door. He spent four years in the Pentagon, getting his start in computer operations.

He also found time to keep up his interest in cars. He managed to rebuild a Chevy V8 engine in his barracks room, carrying the pieces up one at a time (but getting help from a friend to lug the engine block) and hiding the project in a big color TV box. Adding to the challenge was the fact that a guard was posted by the elevator, so he had to carry everything up the stairs. “I never got caught,” Lowe said, smiling at the memory. “But when we brought it out, I put it on dolly, came down in the elevator and wheeled it right past the guard.”

When he returned to the Bay Area in 1983, there was a recession and he applied for jobs all over Silicon Valley, to no avail. A friend asked him if he had considered Lawrence Livermore, but Lowe hadn’t. He submitted an application and was hired. While waiting for his security clearance to work in the classified computing center, he got started in the Magnetic Fusion Energy Computing Center (MFECC), which later became NERSC. After two years, William Harris offered him a job at MFECC and Lowe accepted.

In 1996, when DOE moved NERSC to Berkeley Lab, Lowe was one of the last to decide to go with the move. In hindsight, as he gets ready to start drawing his UC pension, he says he made the right decision.

During his career, he said, he’s proud of his efforts to help bridge the traditional gulf between operations and services. Now, he adds, the groups are integrated and involved from the ground up, “and I think I can take some credit for that.”

His group members are all trained to support both NERSC and ESnet, Lowe said. The ESnet NOC is monitored from one corner of the Control Room, quite a contrast to the large NOCs he has seen when visiting other network centers.  “We come up with tools to help with the automation of monitoring systems, which makes us more effective and makes the job more interesting.”

The group also strives to learn about new technologies as they arrive, something Lowe has done since his days working with microfiche machines and 9-inch reels of tape at Livermore. It’s that steady change that’s kept him engaged over the years.

“When you come into work each day, you never plan on picking up from where you left off the day before,” Lowe said. “You just don’t know what to expect.”