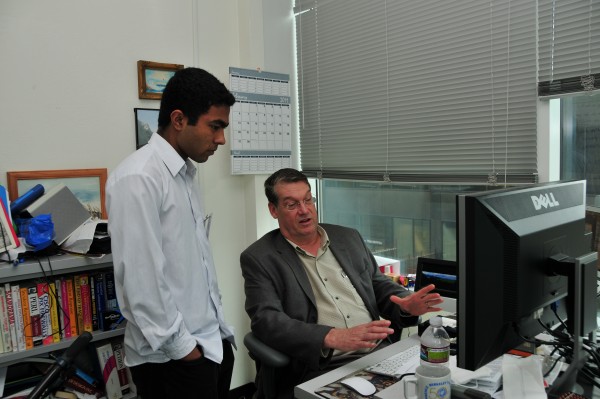 Albany High's Darshan Parajuli (left) shadowed NERSC's Jim Mellander (right) for a first-hand view of what it's like to work in one of the world's preeminent scientific computing centers.

Here’s a list of the Lab staff and students they mentored:

The matches with Lab mentors were facilitated by Jon Bashor of Computing Sciences and Jonathan Slack of the Environmental Energy Technologies Division, both of whom volunteered for the Job Shadow Day committee at the school.

"Thank you so much for making this Job Shadow Day possible. It was an amazing insight to a career I wish to someday pursue. Cait was a great person to shadow. It was awesome – it really inspired me,"
–Saskia Braucher, who shadowed Caitlin Youngquist in the Creative Services Office.

"It was such a positive experience to be able to get an up close look about things that we are seriously considering as professions. Everyone was so friendly and informative not only about what they do currently at the lab but they path that led them there. Thank you to everyone,"
–Lila Rosenfeld, who shadowed Jon Weiner, head of Berkeley Lab’s Communications Group.

“I had a really great time exploring the various jobs that are done in a world class laboratory. The environment was great, and the scientists that showed us around were great. We learned a lot about different aspects of computer science as well as electrical engineering, and sciences. The tutorials were engaging, and interactive; everyone got a chance to give insight on situations. Overall, the experience is great, and I would highly recommend the experience to others,”
– Edward Gong, who visited the National Energy Scientific Research Computing Center (NERSC) at Berkeley Lab’s Oakland Science Facility.

"It was really great—the  presentation was really informative and all of our questions were answered. I liked it that even though our time was officially over, everyone stayed late to keep talking with us,"
– Aaron Allen, who also visited NERSC.

“It worked out really well, as we were able to place almost one-sixth of all the participating students – 19 out of 120 – with Lab mentors... Not only were the students amazed by the breadth of opportunities up here on the Hill, but a number of parents also learned more about what we do here,” says Bashor.