In November 2011, thousands of experts in computing and networking flocked to Seattle, Washington, to participate in tutorials, join panel discussions, lead sessions, give live demonstrations and talks, hold roundtable discussions, help build SCinet—the world's fastest science network—present posters and much more! Here are some highlights from this year's SC11 conference. 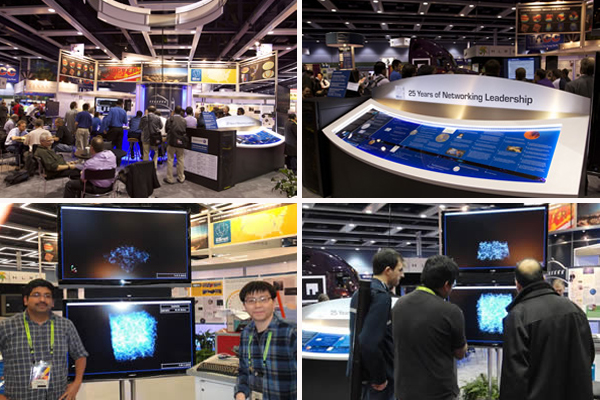 The demo showed side-by-side presentations of a 5 terabyte dataset streamed from NERSC at 100 Gbps (left) and 10 Gbps (right).

The exhibition at the SC11 conference in Seattle got off to a gala start with the annual exhibition opening party on Monday night, Nov. 14. Berkeley Lab staff used the occasion to showcase the scientific capabilities of the new 100-gigabit-per-second prototype network created by ESnet under DOE's Advanced Networking Initiative. The event marked the first use of the prototype to transmit scientific data from the NERSC supercomputing center in Oakland.

The demo showed how the universe has changed from a nearly homogeneous universe or 13 billion years ago to today's universe, which is rich in structures that include galaxies; clusters of gravitationally bound galaxies; galaxy super-structures called "walls" that span hundreds of millions of light-years; and the relatively empty spaces between superstructures, called voids. The simulation was created using the Nyx code on 4,096 cores of NERSC's Hopper, a Cray XE6 system. Read more about the demo.

The demonstration area was packed with invited guests and conference attendees who also toasted ESnet's 25th anniversary of networking leadership.

Traditionally, such systems are designed by costly build-test-bust experiments due to inability to effectively model or to experimentally diagnose (measurements in the very near field of the spray are not possible due to obscuration effects). The ability to simulate this problem helps reduce design cycles substantially and provides new insights into the physics that can provide sprays with enhanced properties. UTRC has seen reductions in design cycles of at least 66%.

IPM is a portable profiling infrastructure, which provides a high level report on the execution of a parallel job. IPM reports hardware counters data, message pattern timings, and memory usage. It provides a low overhead means to generate scaling studies or performance data. 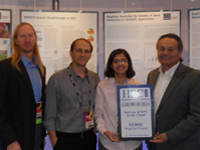 Devarshi Ghoshal ofIndiana University and Shane Canon and Lavanya Ramakrishnan of NERSC at Berkeley Lab received a best paper award at the Second International Workshop on Data Intensive Computing in the Clouds (DataCloud-SC11) for "I/O Performance of Virtualized Cloud Environments" at SC11 in Seattle, Wash.

For the second year in a row, NERSC and the Argonne Leadership Computing Facility also shared HPCWire's reader's choice award for Best Use of HPC in the Cloud. The Magellan project, funded under the American Reinvestment and Recovery Act to explore the sustainability of cloud computing to help meet the computational science requirement of Department of Energy researchers, is located at ACLF in Argonne, Ill. and NERSC in Berkeley, Calif.

At the SC11 meeting in Seattle, the latest Graph500 list announced that NERSC’s Cray XE6 “Hopper” system, placed second overall and first amongst systems currently in production. The Cray XT4 "Franklin” ranked eighth on the list.

The Graph500 list ranks supercomputers based on their performance on data-intensive applications and thus complements the Top 500 list that is based on the LINPACK benchmark. Traditional benchmarks and performance metrics fail to provide useful information on the suitability of supercomputing systems for data-intensive applications. Backed by a steering committee of more than 30 international HPC experts from academia, industry, and national laboratories, Graph 500 established a new set of large-scale benchmarks for these applications. The new benchmarks will guide the design of hardware architectures and software systems intended to support such applications and help procurements.