Ranks 5th in the World BERKELEY, Calif.—The Department of Energy's National Energy Research Scientific Computing Center (NERSC), already one of the world’s leading centers for scientific productivity, is now home to the fifth most powerful supercomputer in the world and the second most powerful in the United States, according to the latest edition of the TOP500 list, the definitive ranking of the world’s top computers

NERSC's newest supercomputer, a 153,408 processor-core Cray XE6 system, posted a performance of 1.05 petaflops (quadrillions of calculations per second) running the Linpack benchmark. In keeping with NERSC's tradition of naming computers for renowned scientists, the system is named Hopper in honor of Admiral Grace Hopper, a pioneer in software development and programming languages. The system, installed d in September 2010, is funded by DOE’s Office of Advanced Scientific Computing Research.

Established in 1974, NERSC is located at Lawrence Berkeley National Laboratory in California and provides computing systems and services to more than 3,000 researchers supported by the Department of Energy (DOE). NERSC’s users, located at universities, national laboratories, and other research institutions around the country, report producing more than 1,500 scientific publications each year as a result of calculations run at NERSC. 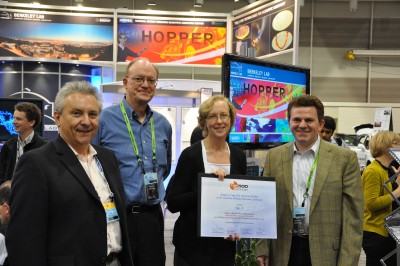 "While we are elated to have entered the petascale performance arena, we are especially excited by the computational science potential offered by Hopper," said Kathy Yelick, Director of the NERSC Division and Associate Laboratory Director of Computing Sciences at Berkeley Lab. "We selected Cray as the system vendor after a competitive procurement based in large part on how proposed systems performed running our application benchmarks. Now that the system is installed and operational, we will begin our acceptance testing in which we run some of the most demanding scientific applications to ensure that Hopper will meet the day-to-day demands of our users."

NERSC serves one of the largest research communities of all supercomputing centers in the United States. The center's supercomputers are used to tackle a wide range of scientific challenges, including global climate change, combustion, clean energy, new materials, astrophysics, genomics, particle physics and chemistry. The more than 400 projects being addressed by NERSC users represent the research mission areas of DOE’s Office of Science.

The increasing power of supercomputers helps scientists study problems in greater detail and with greater accuracy, such as increasing the resolution of climate models and creating models of new materials with thousands of atoms. Supercomputers are increasingly used to compliment scientific experimentation by allowing researchers to test theories using computational models and analyzed large scientific data sets. NERSC is also home to Franklin, a 38,128 core Cray XT4 supercomputer with a Linpack performance of 266 teraflops (trillions of calculations per second). Franklin is ranked number 27 on the newest TOP500 list.