The award will be presented to current C3 members Julian Borrill, Christopher Cantalupo and Theodore Kisner, as well as former members Sara Ricciardi, Federico Stivoli and Radek Stomporon on June 15, 2010 at the Jet Propulsion Laboratory in Pasadena, Calif. All three researchers are also members of the U.S. Planck Team. The NASA Public Service Group Achievement Award honors a group's outstanding accomplishment that has contributed substantially to a NASA mission. 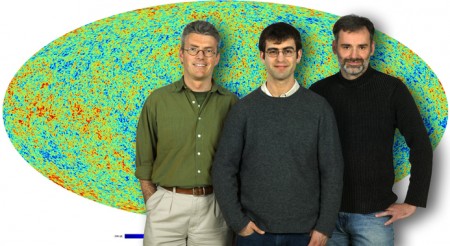 The European Space Agency's Planck satellite— in which NASA is a major partner— is currently gathering the most detailed observations ever made of the Cosmic Microwave Background (CMB), which is essentially the leftover light from the Big Bang that permeates our universe. Transforming these observations into maps of the CMB is a very significant computational challenge in which NERSC’s supercomputers play a leading role. Computing is so critical to the U.S. contribution to the mission that NASA and DOE have entered into a unique Interagency Implementation Agreement guaranteeing Planck long-term access to NERSC resources.

"The CMB is our most valuable resource for understanding fundamental physics and the origins of the universe. We have spent much of the last decade getting the Planck data analysis infrastructure set up at NERSC, and getting this award is really a great honor to our work," says Borrill.

In addition to developing and maintaining the massively parallel software for processing and analyzing data collected by the Planck's high- and low-frequency instruments, the C3 scientists also work closely with NERSC staff to ensure that both the data and the mission-specific and general CMB analysis tools are available on all of the facility's platforms and accessible to all members of the U.S. Planck Team.

The Berkeley Lab team is also named on a second award to the US Planck Data Analysis team for outstanding participation as a partner with European colleagues in conceiving and implementing the overall data analysis strategy for the Planck mission.

C3 is a joint center of Berkeley Lab's Computational Research and Physics Divisions.