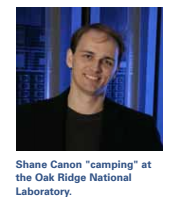 Shane Canon credits the cool, breezy climate and cosmopolitan cultural diversity of California’s Bay Area for bringing him back toBerkeley and NERSC, after a three-year stint at the Oak Ridge National Laboratory in Tennessee. And, the new job was nice too. He will be leading the new Data Systems Group, which will be responsible for the NERSC Global Filesystem (NGF) and associated activities within the center.

“I like to tell people at NERSC that going to Oak Ridge was like going away to a three-year ‘summer camp,’ and now I’m coming home,” says Canon, whose interest in supercomputers emerged when he managed computer clusters for the nuclear sciences laboratory at Duke University, in Durham, N.C., as a graduate student.

From 2000–2005, Canon served as Team Lead for the Parallel Distributed Systems Facility (PDSF) at NERSC. He then left for Oak Ridge to be closer to family in Spartanburg, South Carolina. However, his wife and kids missed the Bay Area, and the job opportunity at NERSC convinced him to move back to California. Canon is kept busy outside of working hours keeping up with soccer games for his daughters Rachel and Halle and keeping his two-year-old son Casey out of trouble. 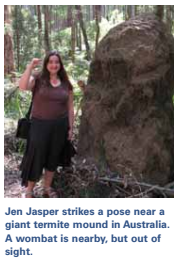 Jen Jasper’s journey to NERSC began on a 60-acre Pennsylvania farm near the Susquehanna River, where she harbored a deep love for both art and nature. In college at Pennsylvania State University, she combined these interests by studying art, biology and teaching. She continued her education at Columbia University in New York, pursing a Master’s in International Education, then spent the next few years at the City University of New York working as an international student advisor. When state budget cuts forced her to manage her own computer systems, Jasper discovered a new talent and hobby. Eventually, further funding cuts forced her westward to California.

During the dot-com era, Jasper found herself in the Silicon Valley developing and designing websites for WombatNet (former Internet service provider for Mac-users), Hotmail, Equinix, and Visto. As the dot-com boom turned to bust, she moved on to NASA Ames, where she did shell scripting and image processing to display remote field images from the Arctic on Future Flight Central’s simulator screen. She also worked on sensor network and fault detection management for NASA’s Mars Underground Mole (MUM), evaluated a web interface for the space shuttle’s Integrated Vehicle Health Management system (IVHM), and designed a testbed and user interfaces for collecting and displaying remote sensing instrument data for a Mars analog site in Andalusia, Spain (MARTE). Just before arriving at NERSC, Jasper completed an Image Reduction and Analysis Facility (IRAF) data reduction and image processing pipeline for the astronomy department at City College of San Francisco. 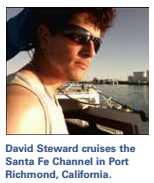 David Stewart’s fascination with computer networks and the Internet can be traced back to his freshman year at the University of California, Davis, when he was introduced to UNIX. “That was the hook for me,” says Stewart.

He decided to go into computer networking, hoping to one day work with scientists and supercomputers. His goal was realized on April 15, 2008, when he started at NERSC. Before joining the Berkeley Lab, Stewart spend 15 years in industry and served as a senior network engineer for a variety of organizations, including BitTorrent Inc., Get Active Software, Robert Louis Stevenson School, [email protected] Inc., and Navisite Inc.

A Bay Area native, Stewart spent most of his life in Oakland and Monterey, and has now settled in Emeryville. On his free time, Stewart enjoys eating sandwiches, taking black-and-white photos, bicycle riding, sailing, playing music, and general fiddling with electromechanical thingies. 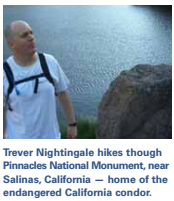 For Trever Nightingale, computers began as a hobby. In graduate school he focused on tackling the mind-brain problem — can science explain how a brain creates conscious experience? He eventually concluded that this was a philosophy problem that couldn’t be solved by science.

“While that stuff was most interesting to me, and still is, it wouldn’t pay the bills; there were no philosophy jobs in academia,” says Nightingale. “Computers were a hobby but became a living because it made sense to do so.”

For more than 10 years, Nightingale has worked as a full-time UNIX administrator. His career began at Minnesota Public Radio, where he contributed to the webcast for Garrison Keillor’s Prairie Home Companion. Prior to starting at NERSC in February, he built many work group-sized Beowulf clusters at the Naval Research Laboratory in Monterey, Calif. Here, he also worked with high-speed interconnects such as Myrinet and Infiniband and gained some exposure to problems and solutions in parallel computation.

A Minnesota native, Nightingale now lives in Berkeley, Calif. On his free time, he enjoys playing with computers and hiking.