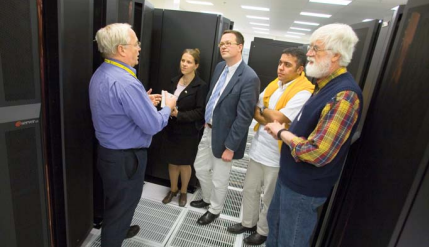 NERSC hosted four visitors from CSCS (Swiss National Supercomputing Centre) last Friday, May 4. After NERSC staff members gave talks about the center’s supercomputing and storage capabilities, they heard from Dominik Ulmer, the COO and Head of Administration at CSCS. Ulmer spoke about the upgrades to its flagship system, a Cray X3 with 3,328 dual-core processors, and plans to build a new computing facility by 2010.

He also talked about a recent initiative called Swiss ALPS Programme, which allocates millions of computing hours to each project and aims to boost the CSCS’s ability to run large-scale projects. Historically, a typical allocation at the center ranges from 40,000 to 200,000 computing hours. Many of the projects being carried out at the CSCS are in the field of molecular dynamics, although the center is striving to broaden the scientific scope in the next four years. CSCS is an autonomous unit of the Federal Institute of Technology in Zurich (ETH Zurich), but the center is located in Mano, in the Italian speaking part of Switzerland.

“NERSC is always impressive,” said Ulmer, who previously had visited NERSC twice. “And it’s always a good opportunity to exchange ideas and learn. We have many things in common.”