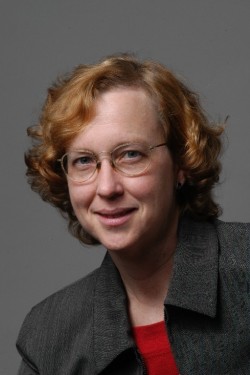 BERKELEY, Calif.—Kathy Yelick, a professor of computer science at the University of California at Berkeley and an internationally recognized expert in developing methods to advance the use of supercomputers, has been named director of the Department of Energy’s National Energy Research Scientific Computing Center (NERSC).

NERSC is DOE’s flagship computing center for unclassified research and is managed by Lawrence Berkeley National Laboratory. The center provides state-of-the-art supercomputing and data storage resources to more than 2,600 researchers at universities and research institutions around the world.

Yelick has received a number of research and teaching awards and is the author or co-author of two books and more than 75 refereed technical papers. She earned her Ph.D. in computer science from MIT and has been a professor at UC Berkeley since 1991 with a joint research appointment at Berkeley Lab since 1996.

“We are truly delighted to have Kathy serve as the next director of NERSC, and only the fifth director since the center was established in 1974,” said Berkeley Lab Director Steven Chu. “Her experience and expertise in advancing the state of high performance computing make her the perfect choice to maintain NERSC’s leadership position among the world’s supercomputing centers.”

Yelick will officially assume her new job in January 2008. Yelick, who has been head of the Future Technologies Group at Berkeley Lab since 2005, succeeds Horst Simon as head of NERSC. Simon, who has led NERSC since 1996, will continue to serve as Berkeley Lab’s Associate Director for Computing Sciences and Director of the Computational Research Division.

“When Horst Simon announced that he wanted to relinquish the leadership of NERSC, we knew he would be a tough act to follow,” said Michael Strayer, head of DOE’s Office of Advanced Scientific Computing Research, which funds NERSC. “But with the selection of Kathy Yelick as the next director, I believe that NERSC will continue to build upon its success in advancing scientific discovery through computation. We are extremely happy to have her take on this role.”

In 2006, Yelick was named one of 16 “People to Watch in 2006” by the newsletter HPCwire. The editors noted that “Her multi-faceted research goal is to develop techniques for obtaining high performance on a wide range of computational platforms, all while easing the programming effort required to achieve high performance. Her current work has shown that global address space languages like UPC and Titanium offer serious opportunities in both productivity and performance, and that these languages can be ubiquitous on parallel machines without excessive investments in compiler technology.”

In addition to high performance languages, Yelick has worked on parallel algorithms, numerical libraries, computer architecture, communication libraries, and I/O systems. Her work on numerical libraries includes self-tuning libraries which automatically adapt the code to machine properties. She is also a consumer of parallel systems, having worked directly with interdisciplinary teams on application scaling, and her own applications work includes parallelization of a CFD model for blood flow in the heart. She is involved in a National Research Council study investigating the impact of the multicore revolution across computing domains, and was a co-author of a Berkeley study on this subject known as the “Berkeley View.” Yelick speaks extensively on her research, with over 15 invited talks and keynote speeches over the past three years.

“After working on projects aimed at making HPC systems easier to use, I’m looking forward to helping NERSC’s scientific users make the most effective use of our resources,” Yelick said. “NERSC has a strong track record in providing critical computing support for a number of scientific breakthroughs and building on those successes makes this an exciting opportunity.”

Click here for an overview of Yelick's research, or see her UC Berkeley home page.