Scientists from the Advanced Plasma Microturbulence Project have published several papers recently that show how they resolve the significant differences between two types of electron temperature gradient (ETG) turbulence simulations in fusion research.

The researchers have been running simulations at NERSC using particle-in-cell (PIC) and continuum gyrokinetic codes in order to reconcile the large gap of electron thermal conductivity values between the two types of simulations.

Investigating the discrepancy is important in understanding electron heat transport during fusion energy generation, when a strong electric current heats and confines a hot plasma in a magnetic field inside a tokamak. The tokamak is a donut-shaped device and a leading design for making fusion power feasible. 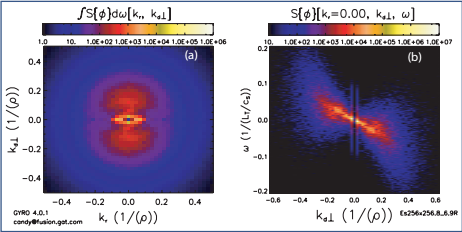 The goal of the project is to develop precise models of ETG drift-wave turbulence using three-dimensional kinetic and fluid simulations. Figuring out drift-wave instabilities and controlling them has improved plasma energy confinement in tokamak experiments.

Headed by William Nevins of the Lawrence Livermore National Laboratory, the project has pooled together the expertise from many institutions. Those researchers are Andris Dimits, Bruce Cohen and Dana Shumaker at Livermore Lab; Greg Hammett at the Princeton Plasma Physics Laboratory; William Dorland at the University of Maryland; Ronald Waltz, Jeff Candy and Jon Kinsey at General Atomics; and Frank Jenko at the Max Planck Institut für Plasmaphysik (IPP) in Garching, Germany.

“NERSC’s machines and support infrastructure are most hospitable for getting our work done,” Cohen said.

The researchers have published several papers this year chronicling how they have tackled several vexing questions about the simulation codes and their diverging results. Previously published results of ETG turbulence simulations that used gyrokinetic continuum codes produced large values of the electron thermal conductivity, which could make ETG turbulence a significant force to consider for tokamak design and operation. But those results were thrown into question when more recent particle-in-cell simulations yielded much lower thermal conductivity values.

In a paper published in Physics of Plasmas in August, Nevins and his fellow researchers demonstrated that GEM (developed by Scott Parker and Yang Chen at the University of Colorado), a turbulence simulation code using the particle-in-cell method, would produce substantially the same results at the same operating point as popular continuum and particle-in-cell codes such as GYRO, GS2, GENE and PG3EQ.

The authors noted that verifying the codes is an important step in accurately modeling how plasma behaves in a tokamak. “Benchmarking turbulence simulation codes is an important exercise in code verification. This code verification exercise is particularly important in light of recent controversies, in which particle and continuum codes showed qualitative differences in electron energy flux,” the researchers wrote.

In other papers, published in Physics of Plasmas in December 2005, and in Nuclear Fusion in July 2007, the scientists showed that discrete particle noise was the cause of the lower thermal conductivity values. In those previously published results, the particle noise would suppress the turbulence, skewing the models. Their findings corroborated other studies showing that particle-in-cell simulations could produce higher thermal conductivity values “provided that care is taken to monitor and managetion noise.”

The research further supported earlier conclusions from continuum-code simulations that the values of the thermal conductivity are large enough to play a significant role in tokamaks.

In a third paper, which was published in the August issue of Plasma Physics and Controlled Fusion, the researchers followed up their previous simulation work using GYRO, a continuum code. In 2006, they had established a connection between velocity space resolution, entropy saturation and conservation, and numerical dissipation. This year, they found that ETG simulations with kinetic ions could cure unphysically large saturation levels in ETG simulations with adiabatic ions.

Learn more about the fusion project at http://www.mfescience.org.