Late last year, four researchers from the NERSC Center and Lawrence Berkeley National Laboratory’s Computational Research Division spent nearly one week at the Earth Simulator Center in Japan. Their objective was to run a series of scientific applications on the Japanese supercomputer, in part to assess the viability of the Earth Simulator’s vector architecture for codes important to the DOE Office of Science mission.

The visit merited an article and photo in the Japanese-language “ES News” newsletter. Here is a translation of the article, courtesy of NERSC’s Jonathan Carter, one of the participants.

“In the way that University of Tennessee Professor Dongarra commented ‘The best researchers from all over the world will come to use the Earth Simulator– from Japan’s point of view it is a wonderful chance’, collaborative research with the Earth Simulator Center and well-known international research establishments is continuing. 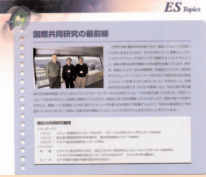 “At the end of last year, three researchers from the U.S. Department of Energy’s National Energy Research Computer Center (NERSC) came to Japan to use the Earth Simulator. We asked one of the three, Jonathan Carter, who had become well acquainted with Japan during business trips while working at IBM and continues to study Japanese as a hobby, his impression of the Earth Simulator. He told us that ‘We prepared for this visit expecting that the Earth Simulator was a lot like an NEC SX-6, so at first we encountered various problems, but through collaboration with everyone here, we were able to overcome them. This is our first experience with a multi-node NEC computer, so on this visit we conducted various benchmark tests to gauge the ability of the system. On our next visit we are considering running some climate and combustion simulations.’”