Every year since 1963, R&D Magazine has showcased the 100 best ideas in industrial and technical innovation through the annual awards program known informally as "the Oscars of Invention."

RAGE was designed as a roaming telepresence robot to enhance two-way interactive audio and video communication between groups connected by the Internet. RAGE was specifically designed and built to provide mobile, remote connectivity to the Access Grid (AG), an international ensemble of multimedia display, presentation and interactive videoconferencing sites. The AG is designed to support such interactions as distributed meetings, collaborative work sessions, seminars, lectures, tutorials and training on a global scale.

RAGE is a working demonstration of a number of ideas developed as part of the U.S. Department of Energy's efforts to develop collaborative tools to help scientists at sites around the country collaborate on experiments, research and computational science by providing access to unique scientific facilities. Such collaborations require real-time interactive communication, remote control of instruments and seamless access from remote, dispersed sites. RAGE incorporates work done at Berkeley Lab in this field and demonstrates how these tools can be easily adapted to new projects.

Although the AG seeks to "democratize" interactive videoconferencing by using open-source software and standard desktop computers, the AG does require dedicated facilities with special display screens, cameras and sound connections. RAGE takes the AG beyond the confines of these specialized facilities. RAGE's combination of two-way audio and video capability, on-board computer running AG software, and four-wheel drive and steering allows users to take the AG to scientific facilities, to conference sessions, classrooms and almost any location where wireless connectivity is available.

So, why all the fuss to expand the AG? What differentiates the AG from various desktop computer conferencing applications focusing on individual communication is the AG's design focus on group-to-group interactions. There are currently 84 AG nodes at leading universities, research institutions and industrial sites in the United States, Canada, Brazil, Japan, Korea, China, Australia, and throughout Europe. RAGE adds another dimension to this network by enabling mobile connectivity. In short, RAGE has the capability to bring the world to a global network. 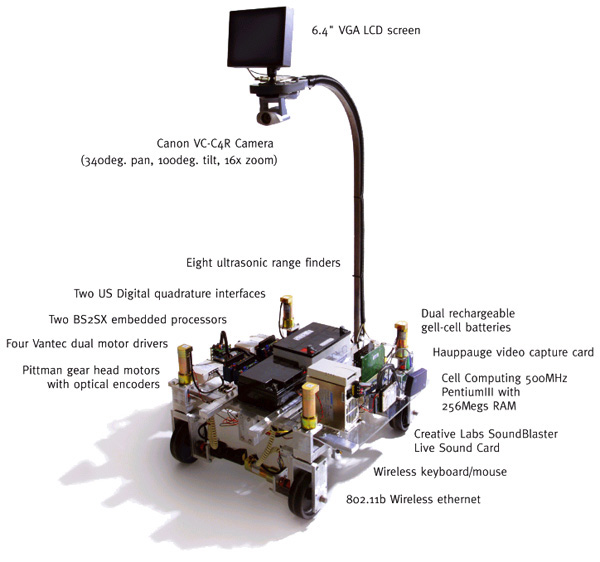 RAGE connectivity to multiple sites connected to the Access Grid is provided via an on-board computer running the necessary open source software, along with a camera, microphone, display screen and speakers for two-way visual and audio communication. Here are some of its other features and capabilities:

RAGE debuted at the SC 2001 conference (formerly known as Supercomputing) held in November 2001 in Denver. The robot roamed the floor of the exhibition hall, attracting widespread attention. While at the conference, the robot linked various events and exhibits to interested researchers who used Access Grid facilities in Asia, Europe and North America to participate in the conference. In one demonstration of the capabilities of the AG to present an international collaboration of dance and music, RAGE was tapped on a moment's notice to provide live images from the exhibition hall when another AG-configured computer was unavailable.

RAGE can be deployed as a remote videoconferencing link to the Access Grid in any building equipped with the appropriate wireless infrastructure. Lawrence Berkeley National Laboratory and the adjacent University of California at Berkeley are two of the world's leading research institutions. RAGE can provide a cost-effective link to help share the knowledge and experiences of these institutions with others around the world.