While his work in accelerator modeling on supercomputers definitely puts his professional life in the fast lane, Andreas Adelmann and his family are finding it a challenge to adjust to the fast-paced Bay Area lifestyle.

Selected as the first recipient of NERSC's Luis Alavarez Postdoctoral Fellowship in Computational Science, Adelmann, his wife and three children recently moved into a home in North Berkeley. In their native Switzerland, they lived in Lenzburg, a town of about 8,000, 15 miles west of Zurich.

"This area is so busy, with everybody rushing around," Adelmann said. "It's kind of a culture shock."

Perhaps fittingly, Adelmann began adapting to the local "everything at the last minute" lifestyle when he successfully defended his Ph.D. dissertation just a week before moving to California.

Adelmann had vacationed here before and had previously worked in the United States, spending three months at Los Alamos National Laboratory. In fact, the same person he worked with at LANL, Robert Ryne, was responsible for recruiting Adelmann for the Alvarez fellowship. 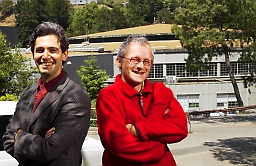 Rob Ryne and Andreas Adelmann, standing in front of the old Bevatron building, are creating computational models of the next generation of accelerators.

Rob Ryne and Andreas Adelmann, standing in front of the old Bevatron building, are creating computational models of the next generation of accelerators.
Ryne, a recognized expert in accelerator modeling and one of the top users of NERSC's supercomputers, was still at Los Alamos when he encouraged Adelmann to apply for the fellowship. Ryne joined Berkeley Lab's Accelerator and Fusion Research Division last year and Adelmann subsequently learned that he had been chosen as the first recipient of the fellowship.

"Although he is an early-career scientist who just finished his dissertation this past summer, Andreas is already one of the leading researchers in Europe developing the tools for large-scale simulation of accelerators using parallel computers," said NERSC Division Director Horst Simon. "With his background and experience, he is a perfect match to connect NERSC with the Accelerator Modeling SciDAC project, and we expect him to make contributions to the progress of this project."

At LBNL, Adelmann is working with Ryne and Esmond Ng in NERSC's Scientific Computing Group to model next-generation accelerators as part of DOE's Scientific Discovery through Advanced Computing (SciDAC) Accelerator Physics Project. Ryne had developed codes for modeling linear accelerators, while Adelmann has modeled circular accelerators.. Their codes have the same goal of accurately modeling beams, and they are using the two models to try to achieve the same results.

Adelmann did his doctoral thesis at the Eidgenoessischen Technischen Hochschule (ETH) while working at the Paul Scherrer Institute in Switzerland. The institute, comparable to a national laboratory, operates proton cyclotrons and an electron light source. Adelmann earned his Ph.D. in mathematics from the ETH.