Celeste is a new, fully generative model of optical telescope image sets. In Celeste, each pixel intensity in a collection of astronomical images is modeled as a Poisson random variable, with a unique rate parameter dependent on latent properties of stars and galaxies. Some latent properties are themselves random, with scientific prior distributions constructed from large ancillary data sets. 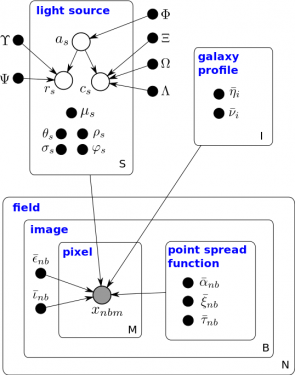 Formulating the problem of catalog building as inference in a probabilistic graphical model allows astronomers and statisticians to incorporate more prior information and physical structure into the problem.  For example, new object types (e.g. quasars) and object structure (e.g. complex galaxy appearances) can be incorporated and jointly learned in the fully probabilistic framework.  Existing catalogs can be incorporated into model priors.

Variational inference uses numerical optimization to approximate the posterior distribution. VI can be orders of magnitude faster than MCMC--and computational efficiency is critical for working with large astronomical datasets. We consider a class of approximating distributions that lead to efficient numerical optimization. Because the posterior distribution typically is not contained in this class of approximating distributions, however, VI introduces some bias. VI also restricts the form of the probabilistic model, making it challenging in Celeste to model some latent properties, such as the locations of astronomical objects, as random variables rather than as unknown constants. (Uncertainty is only estimated for the former.)

In future work, we aim to develop a new approach to variational inference, based on second-order stochastic optimization, that removes all restrictions on the types of models that VI can efficiently be applied to. Second, we aim to expand the class of approximating distributions to capture dependence between various latent properties, again, while maintain the computational efficiency of our current procedure. Third, we aim to incorporate a highly accurate generative model of galaxy shapes, based on a neural network, into the Celeste model. A more realistic galaxy model will improve the quality of our inference across the board. Fourth, we aim to include more of the tasks currently treated as preprocessing (e.g., cosmic ray detection) in our main inference routine. Then catalog inference can outlier detection, and vice versa, further enhancing the quality of the inferred astronomical catalogs.

Markov chain Monte Carlo (MCMC) is an inference technique designed to generate samples distributed according to the posterior distribution of interest.  MCMC methods construct a Markov chain with a sample path that admits the true posterior distribution as marginals, resulting in correctly distributed, though autocorrelated samples.  MCMC often enjoys desirable asymptotic properties, converging to the correct distribution as the number of samples grows.  However, it is computationally intensive, and it is often difficult to assess convergence.  While variational inference and MCMC are often discussed as alternatives, they need not be mutually exclusive.  For instance, a variational posterior can be used to generate proposals, which can accelerate posterior computations and be asymptotically correct.

This avenue of research aims to scale MCMC methods to astronomical datasets for building catalogs.  MCMC is appealing in this setting because of its theoretical ability to estimate true posterior uncertainty.  The challenge lies in designing algorithms to minimize and amortize computation.  We aim to first design MCMC algorithms to sample physical parameters represented in Celeste.  Our next goal, inspired by amortized variational inference procedures, is to use these samplers and new inference methods to generate efficient proposals for our MCMC routines.  The hope is to maintain the asymptotic properties of MCMC while boosting computational efficiency.