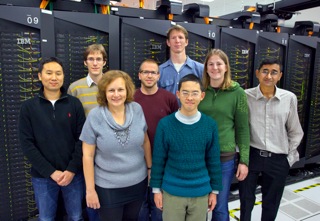 The Computational Science and Engineering Petascale Initiative at LBNL, which ran from 2009-2013, identified key application areas with specific needs for advanced programming models, algorithms, and other support. The applications were chosen to be consistent with the mission of the Department of Energy, with a particular focus on applications that benefit energy research, those supported by other Recovery Act funding and Energy Frontier Research Centers (EFRCs). The initiative paired post-doctoral researchers with these high-impact projects at NERSC. The post-doctoral research program was centered at the Oakland Scientific Facility (OSF), NERSC's operations center and was led by principal investigator Alice Koniges.

The multicore revolution provides opportunity for major increases in computational power over the next several years, if it can be harnessed. Elective use of multicore platforms is essential for science problems that require petascale computing, but is also necessary to continue the performance growth associated with Moore's Law at computing systems at all scales. This transition from simply increasing the single-processor and network performance to a different architectural paradigms forces application programmers to rethink the basic models of algorithm development and parallel programming from both the language and problem division standpoints. Additionally, advances in architecture and availability of resources are making the high performance computing (HPC) world more attractive to a variety of research areas that were not previously using advanced computing.

A recent news story on the Petscale Postdocs has appeared.  Please also see our publications page.

Where Are They Now?