Note: This press release was adapted from the original release prepared by Oak Ridge National Laboratory.

If equal amounts of matter and antimatter had formed in the Big Bang more than 13 billion years ago, one would have annihilated the other upon meeting, and today’s universe would be full of energy – but no matter – to form stars, planets, and life.

So the very existence of matter suggests something is wrong with Standard Model equations describing symmetry between subatomic particles and their antiparticles.

In a study published March 26 in Physical Review Letters, nuclear physicists from the Department of Energy’s Lawrence Berkeley National Laboratory (Berkeley Lab) and other institutions working on the MAJORANA DEMONSTRATOR experiment have shown that they can shield a sensitive, scalable, 44-kilogram germanium detector array from background radioactivity. The experiment is led by Oak Ridge National Laboratory (ORNL).

This accomplishment is critical to developing and proposing a much larger future experiment – with approximately a ton of detectors – to study the nature of neutrinos. These electrically neutral particles interact only weakly with matter, making their detection exceedingly difficult.

“We’re trying to figure out the really basic question: Are neutrinos their own antiparticles?” said Alan Poon, the detector group leader for the MAJORANA DEMONSTRATOR. “Another goal is to demonstrate that we can actually build a bigger detector.”

John Wilkerson, a nuclear physicist from ORNL and the University of North Carolina at Chapel Hill who led the construction of the experiment, said, “The excess of matter over antimatter is one of the most compelling mysteries in science.” The collaboration involves 129 researchers from 27 institutions and 6 nations.

The experiment seeks to observe a phenomenon in atomic nuclei called “neutrinoless double-beta decay.” This observation would prove that neutrinos are their own antiparticles. The existence of this type of decay would have “profound implications for our understanding of the universe,” Wilkerson added. These measurements could also provide a better understanding of neutrino mass.

Poon noted that the electronics and other components surrounding the detectors are made of ultrapure materials to reduce background “noise,” or unwanted signals from naturally occurring radiation. “They are the lowest-radioactivity front-end electronics in the world,” he said. 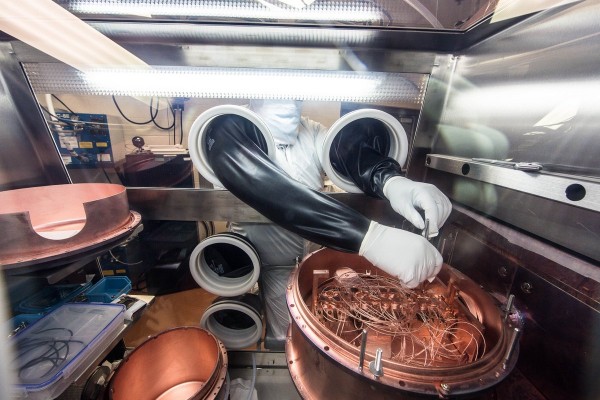 A researcher works on the delicate wiring of a MAJORANA cryostat, which is like a thermos under vacuum that chills the detectors at the heart of the experiment. The experiment’s two cryostats each house 29 germanium detectors. Berkeley Lab fashioned a specialized form of germanium crystals into working detectors for the experiment. (Credit: Matthew Kapust/Sanford Underground Research Facility)

The collaboration also used Berkeley Lab’s National Energy Research Scientific Computing Center (NERSC) to process and analyze data from the experiment. NERSC will be the principal site for data processing and analyses throughout the course of the experiment.

That was the key accomplishment of the MAJORANA DEMONSTRATOR. Its implementation was completed in South Dakota in September 2016, nearly a mile underground at the Sanford Underground Research Facility. Siting the experiment under nearly a mile of rock was the first of many steps collaborators took to reduce interference from background levels of radiation. Other steps included a cryostat made of the world’s purest copper and a complex six-layer shield to eliminate interference from cosmic rays, radon, dust, fingerprints, and naturally occurring radioactive isotopes.

“If you’re going to search for neutrinoless double-beta decay, it’s critical to know that radioactive background is not going to overwhelm the signal you seek,” said ORNL’s David Radford, a lead scientist in the experiment.

There are many ways for an atomic nucleus to fall apart. A common decay mode happens when a neutron inside the nucleus emits an electron (called a “beta”) and an antineutrino to become a proton. In two-neutrino double-beta decay, two neutrons decay simultaneously to produce two protons, two electrons, and two antineutrinos. This process has been observed. The MAJORANA Collaboration seeks evidence for a similar decay process that has never been observed, in which no neutrinos are emitted.

Conservation of the number of leptons – subatomic particles such as electrons, muons, or neutrinos that do not take part in strong interactions – was written into the Standard Model of particle physics. “There is no really good reason for this, just the observation that it appears that’s the case,” said Radford. “But if lepton number is not conserved, when added to processes that we think happened during the very early universe, that could help explain why there is more matter than antimatter.”

Many theorists believe that the lepton number is not conserved: that the neutrino and the antineutrino – which were assumed to have opposite lepton numbers – are really the same particle spinning in different ways. Italian physicist Ettore Majorana introduced that concept in 1937, predicting the existence of particles that are their own antiparticles.

The MAJORANA DEMONSTRATOR uses germanium crystals as both the source of double-beta decay and the means to detect it. Germanium-76 (Ge-76) decays to become selenium-76, which has a smaller mass. When germanium decays, mass gets converted to energy that is carried away by the electrons and the antineutrinos. “If all that energy goes to the electrons, then none is left for neutrinos,” Radford said. “That’s a clear identifier that we found the event we’re looking for.”

The scientists distinguish two-neutrino vs. neutrinoless decay modes by their energy signatures. “It’s a common misconception that our experiments detect neutrinos,” said Jason Detwiler of the University of Washington, who is a co-spokesperson for the MAJORANA Collaboration and a former Glenn T. Seaborg Postdoctoral Fellow at Berkeley Lab. “It’s almost comical to say it, but we are searching for the absence of neutrinos. In the neutrinoless decay, the released energy is always a particular value. In the two-neutrino version, the released energy varies but is always smaller than it is for neutrinoless double-beta decay.”

The MAJORANA DEMONSTRATOR has shown that the neutrinoless double-beta decay half-life of Ge-76 is at least 1025 years – 15 orders of magnitude longer than the age of the universe. So it’s impossible to wait for a single germanium nucleus to decay. “We get around the impossibility of watching one nucleus for a long time by instead watching on the order of 1026 nuclei for a shorter amount of time,” explained co-spokesperson Vincente Guiseppe of the University of South Carolina.

Chances of spotting a neutrinoless double-beta decay in Ge-76 are rare – no more than 1 for every 100,000 two-neutrino double-beta decays, Guiseppe said. Using detectors containing large amounts of germanium atoms increases the probability of spotting the rare decays. Between June 2015 and March 2017, the scientists observed no events with the energy profile of neutrinoless decay, the process that has not yet been observed. (This was expected given the small number of germanium nuclei in the detector). However, they were encouraged to see many events with the energy profile of two-neutrino decays, verifying the detector could spot the decay process that has been observed. 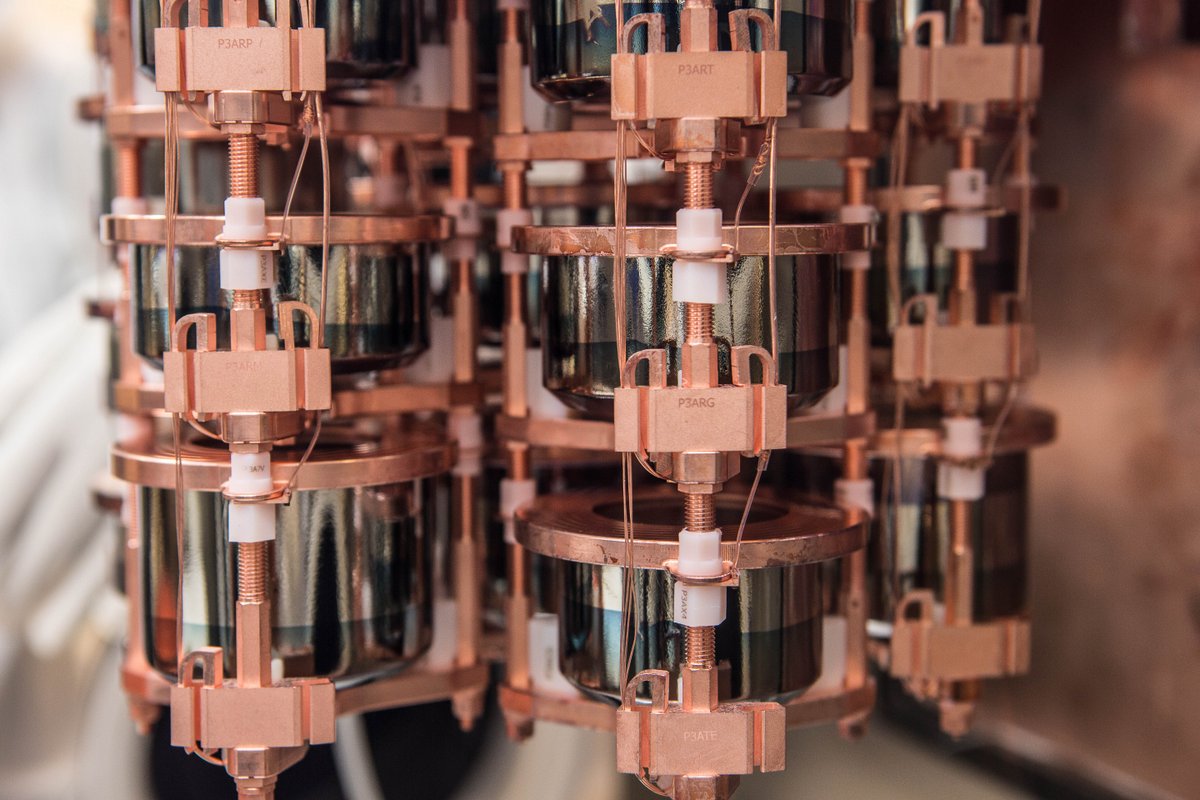 The MAJORANA Collaboration’s results coincide with new results from a competing experiment in Italy called GERDA (for GERmanium Detector Array), which takes a complementary approach to studying the same phenomenon. “The MAJORANA DEMONSTRATOR and GERDA together have the lowest background of any neutrinoless double-beta decay experiment,” said Radford.

The DEMONSTRATOR was designed to lay the groundwork for a ton-scale experiment by demonstrating that backgrounds can be low enough to justify building a larger detector. Just as bigger telescopes collect more light and enable viewing of fainter objects, increasing the mass of germanium allows for a greater probability of observing the rare decay. With 30 times more germanium than the current experiment, the planned one-ton experiment would be able to spot the neutrinoless double-beta decay of just one germanium nucleus per year.

The MAJORANA DEMONSTRATOR is planned to continue taking data for two or three years. Meanwhile, a merger with GERDA is in the works to develop a possible one-ton detector called LEGEND, planned to be built in stages at an as-yet-to-be-determined site.

Poon said, “Our data demonstrates that the background signals are low enough that we can actually build a bigger detector.”

LEGEND 200, the LEGEND demonstrator, represents a step toward a possible future ton-scale experiment that will be a combination of GERDA, MAJORANA, and new detectors. Scientists hope to start on the first stage of LEGEND 200 by 2021. A ton-scale experiment, LEGEND 1000, would be the next stage, if approved.

“This merger leverages public investments in the MAJORANA DEMONSTRATOR and GERDA by combining the best technologies of each,” said LEGEND Collaboration co-spokesperson (and long-time MAJORANA spokesperson up until last year) Steve Elliott of Los Alamos National Laboratory.

Funding came from the U.S. Department of Energy Office of Science and the U.S. National Science Foundation. The Russian Foundation for Basic Research and Laboratory Directed Research and Development programs of DOE’s Los Alamos, Lawrence Berkeley, and Pacific Northwest national laboratories provided support. The research used resources of the Oak Ridge Leadership Computing Facility and NERSC, which are DOE Office of Science User Facilities at ORNL and Berkeley Lab, respectively. Sanford Underground Research Facility hosted and collaborated on the experiment.