News
Home » News » News » Science News » Simulating a Map of the Cosmic Microwave Background: What the Planck Satellite Will See

Simulating a Map of the Cosmic Microwave Background: What the Planck Satellite Will See

Julian Borrill, Radek Stompor, and Christopher Cantalupo used the Seaborg supercomputer at NERSC and a year's worth of simulated Planck satellite data to produce the high-resolution map of the CMB behind them. The colors show tiny temperature fluctuations in the CMB, echoing the Big Bang. (Image NERSC, photo Roy Kaltschmidt)

In the year 2007 the European Space Agency, with substantial NASA participation, will launch the Planck satellite on a mission to map the cosmic microwave background (CMB), the remnant radiation believed to be an echo of the Big Bang that started the universe.

Planck is designed to map CMB temperature and polarization fluctuations with unprecedented resolution and sensitivity, but the enormous volume of data this will generate poses a major computational challenge. Can such a mountain of data be efficiently processed?

Berkeley Lab researchers led by astrophysicist Julian Borrill of the Computational Research Division (CRD) have achieved what they say is a "significant milestone" by
processing an entire year's worth of simulated Planck data at the single most CMB-sensitive frequency, producing a high-resolution CMB map in just two hours. Using

NERSC’s Seaborg supercomputer, the researchers ran their data on 6,000 of Seaborg's 6,080 processors at once, mapping 75 billion observations to 150 million pixels. The run was the first ever to use virtually all of Seaborg’s computing processors on a single code. 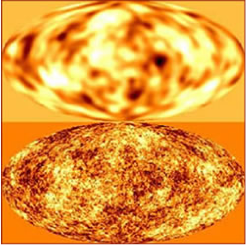 These CMB maps show COBE's angular resolution of 7 degrees (top) compared to a simulation of the 5 to 10 arc-minute resolution expected from the Planck satellite. (Images NASA, ESA)

“We’ve shown that we can make maps even with the volume of data we will get from Planck,” says Borrill. “There's no computational show-stopper to prevent us from working with the necessary resolution and accuracy. We’ll be able to make CMB maps from the Planck data that astronomers will be able to use for science.”

The map was used to create a poster which has been featured at three recent scientific conferences: the Zeldovich-90 International Conference on Cosmology and High Energy Physics held in Moscow in December, the 205th meeting of American Astronomical Society in San Diego in January and the Planck Consortium meeting in Munich in January.

Collaborating with Borrill on the project were Radek Stompor of CRD and Christopher Cantalupo of the Space Sciences Laboratory at UC Berkeley, where Borrill and Stompor also hold appointments. The three colleagues give much credit to the staff at NERSC, who helped shepherd them through all the potential bottlenecks of running 6,000 processors simultaneously.

“The support that the NERSC staff gave us was incredible,” says Borrill. “We’ve shown that we can make high-level, optimal CMB maps at the 217 megahertz frequency”  217 million cycles per second – “which is the most CMB-sensitive of Planck’s eight detectors and the frequency that will generate the most data. Such maps will be critical for maximizing the scientific return of the Planck mission.”

Out of the cosmic fog

According to the standard model of cosmology, the universe was created 14.7 billion years ago in a titanic explosion dubbed the Big Bang. In the immediate aftermath of this explosion the universe underwent inflation, an enormous expansion of space at a rate many times faster than the speed of light. Rapid expansion led to a cooling of the universe.

Approximately 400,000 years after the Big Bang, temperatures had cooled enough for protons to capture electrons and form hydrogen atoms. At this point photons, no longer scattered by the dense fog of unattached electrons, were free to move about the universe. 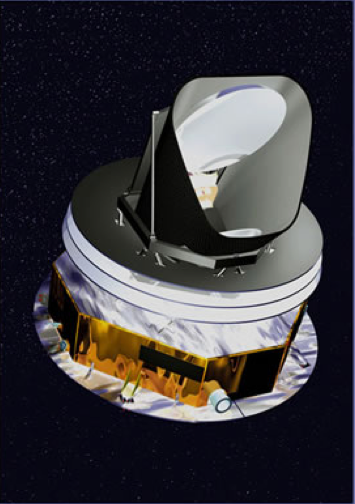 The Planck satellite is a collaboration between the European Space Agency and NASA, scheduled for launch in 2007. Planck's mission is to map temperature and polarization fluctuations in the cosmic microwave background (CMB) with unprecedented resolution and sensitivity. (Image Alcatel, ESA)

Today, photons from the Big Bang have cooled to the very low energy of 2.7 Kelvin, but they permeate the entire universe in the form of microwaves of about one millimeter in wavelength.

When the CMB was first accidentally discovered in 1965 by radio astronomers Arno Penzias and Robert Wilson, it was observed to be isotropic, meaning uniform in all directions — which ran contrary to theory. Subsequent, increasingly sensitive observations revealed that the CMB is actually anisotropic after all: indeed, tiny temperature fluctuations in the earliest radiation were first detected in 1992 in an experiment led by Berkeley Lab physicist George Smoot using NASA's Cosmic Background Explorer satellite, COBE. These temperature fluctuations gave rise to the galaxies and clusters of galaxies that populate our universe today.

The resolution of the COBE images was not sufficient to see any but the largest temperature fluctuations. Subsequent ground and balloon based-experiments, such as MAXIMA and BOOMERANG (whose data were also analyzed at NERSC), have measured smaller-scale temperature fluctuations and some polarization fluctuations as well. But these experiments measure only portions of the sky and aren't sensitive enough to see all the spectral data that the CMB should harbor — data that could help answer a number of important cosmological questions about such things as the Hubble constant and the cosmological constant, important for understanding the expansion of the universe, and the abundance of baryons, the class of massive fundamental particles that includes protons and neutrons.

MADmap: drinking from the firehose

The Planck satellite, named for Max Planck, the father of quantum theory, is designed to provide enough data to yield full-sky maps in eight frequency bands in the microwave regime between 30 and 857 gigahertz (billions of cycles per second). Such maps would boast an angular resolution of 5 to 10 arc minutes and a sensitivity of a millionth of a degree. (An arc minute is a 60th of a degree; the width of the sun or the full moon viewed from Earth is about half a degree. COBE's best angular resolution was about 7 degrees.)

To produce these maps from the Planck data, Borrill and his colleagues have developed software called MADmap, which stands for Microwave Anisotropy Dataset map-maker. MADmap capitalizes on massively parallel computational capabilities to create millions of pixels from billions of observations.

"We made this map from simulated data that used all 12 of Planck's detectors at the 217-megahertz frequency," Borrill says. "If we can map at this frequency, we should be able to map for all the CMB frequencies that Planck will observe."