Even if all greenhouse gases had been stabilized in the year 2000, we would still be committed to a warmer Earth and greater sea level rise in the present century according to a new study by a team of climate modelers at the National Center for Atmospheric Research (NCAR). The models were run on supercomputers at NCAR and several DOE labs, including NERSC, and on the Earth Simulator in Japan. The findings were published in the March 18, 2005 issue of the journal  Science.

The modeling study quantifies the relative rates of sea level rise and global temperature increase that we are already committed to in the 21st century. Even if no more greenhouse gases were added to the atmosphere, globally averaged surface air temperatures would rise about a half degree Celsius (one degree Fahrenheit)
and global sea levels would rise another 11 centimeters (4 inches) from thermal expansion alone by 2100.

Figure 1. Ensemble mean percent increase of globally averaged surface air temperature and sea level rise from the two models computed relative to values for the base period 1980–1999 for the experiment in which greenhouse gas concentrations and all other atmos- pheric constituents were stabilized at the end of the 20th century.

“Many people don’t realize we are committed right now to a significant amount of global warming and sea level rise because of the greenhouse gases we have already put into the atmosphere,” said lead author Gerald Meehl. “Even if we stabilize greenhouse gas concentrations, the climate will continue to warm, and there will be proportionately even more sea level rise. The longer we wait, the more climate change we are committed to in the future.”

The half-degree temperature rise is similar to that observed at the end of the 20th century, but the projected sea level rise is more than twice the 3-inch (5-centimeter) rise that occurred during the latter half of the previous century (Figure 1). These numbers do not take into account fresh water from melting ice sheets and glaciers, which could at least double the sea level rise caused by thermal expansion alone.

The North Atlantic thermohaline circulation, which currently warms Europe by transporting heat from the tropics, weakens in the models. Even so, Europe heats up with the rest of the planet because of the overwhelming effect of greenhouse gases.

Though temperature rise shows signs of leveling off 100 years after stabilization in the study, ocean waters continue to warm and expand, causing global sea level to rise unabated. 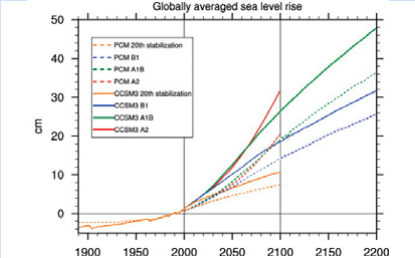 The inevitability of the climate changes described in the study is the result of thermal inertia, mainly from the oceans, and the long lifetime of carbon dioxide and other greenhouse gases in the atmosphere. Thermal inertia refers to the process by which water heats and cools more slowly than air because it is denser than air.

The new study is the first to quantify future committed climate change using “coupled” global three-dimensional climate models. Coupled models link major components of Earth’s climate in ways that allow them to interact with each other. Meehl and his NCAR colleagues ran the same scenario a number of times and averaged the results to create ensemble simulations from each of two global climate models. Then they compared the results from each model.

The scientists also compared possible climate scenarios in the two models during the 21st century in which greenhouse gases continue to build in the atmosphere at low, moderate, or high rates. The worst-case scenario projects an average temperature rise of 3.5°C (6.3°F) and sea level rise from thermal expansion of 30 centimeters (12 inches) by 2100 (Figure 2). All scenarios analyzed in the study will be assessed by international teams of scientists for the next report by the Intergovernmental Panel on Climate Change, due out in 2007.

The NCAR team used the Parallel Climate Model (PCM), developed by NCAR and the Department of Energy, and the new Community Climate System Model (Version 3). The CCSM3 was developed at NCAR with input from university and federal climate scientists around the country and principal funding from the National Science

Foundation (NCAR’s primary sponsor) and the Department of Energy. The CCSM3 shows slightly higher temperature rise and sea level rise from thermal expansion and greater weakening of the thermohaline circulation in the North Atlantic. Otherwise, the results from the two models are similar.