BERKELEY, CA -- On April 26, 2000, the international BOOMERANG consortium led by Andrew Lange of the California Institute of Technology and Paolo de Bernardis of Università de Roma, "La Sapienza," announced results of the most detailed measurement yet made of the cosmic microwave background radiation (CMB).

Findings of BOOMERANG, which stands for "balloon observations of millimetric extragalactic radiation and geophysics," strongly indicate that the curvature of the universe is not positive or negative but flat. Much of the data analysis was performed at the Department of Energy's National Energy Research Scientific Computing Center (NERSC) at Lawrence Berkeley National Laboratory.

"From studying our universe to studying the human genome, scientists are generating incredible amounts of data -- but it takes the capabilities of supercomputing facilities such as the Energy Department's National Energy Research Scientific Computing Center to make sense of and learn from that data," said Secretary of Energy Bill Richardson.

The strength of the CMB fluctuations on different angular scales as measured by BOOMERANG: points with error bars are the data, while the curve corresponds to the best-fitting cosmological model.

In January 1999, the BOOMERANG Long Duration Ballooning mission completed its circumnavigation of the South Pole after ten and a half days aloft. Instruments suspended beneath the balloon made close to one billion measurements of tiny variations in the temperature of the CMB across a wide swath of the sky.

"This is the largest and most precise set of CMB data yet collected," says BOOMERANG team member Julian Borrill, an astrophysicist and computer scientist with NERSC. From the dataset, the BOOMERANG team was able to make the most detailed map of the CMB's temperature fluctuations ever seen.

From a map of these temperature fluctuations, the researchers derived a "power spectrum," a curve that registers the strength of the fluctuations on different angular scales, and which contains information on such characteristics of the universe as its geometry and how much matter and energy it contains.

"CMB data is remarkably clean," says astrophysicist Andrew Jaffe of the University of California at Berkeley, a BOOMERANG team member and, like NERSC's Borrill, a member of the university's Center for Particle Astrophysics and its Space Sciences Laboratory. "You can write down everything you know about the data and then calculate the most likely power spectrum -- a task that is conceptually simple but computationally challenging."

On the Cray T3E, however, processing time over the life of the project totaled less than three weeks. The power spectrum from the BOOMERANG Antarctic flight data is detailed enough to allow the determination of fundamental cosmic parameters to within a few percent.

All CMB experiments seek to determine the state of the universe some 300,000 years after the Big Bang, when the universe cooled enough for protons and electrons to form hydrogen atoms. At that moment, photons were freed from what had been a hot primordial soup of subatomic particles. Ever since that time these energetic photons have been traveling through space, their wavelength now stretched to microwave scale and their frequency reduced to the equivalent of radiation from a black body at only 2.73 degrees Kelvin.

The BOOMERANG data (region rising toward the left) constrain the sum of the fractions of matter (W m) and dark energy (W L ) in the universe. Complementary observations of type Ia supernovae (region rising toward the right) constrain the difference of these fractions. Taken together the results point to a flat universe that will expand forever, made up of about 1/3 matter and 2/3 dark energy.

The first step in deriving information from CMB observations is to map the tiny fluctuations in this background radiation -- temperature differences of no more than 1 part in 100,000 which reflect the equally tiny inhomogeneities in the early universe, a time when the universe was in a much simpler state than it is today.

"We basically have to separate the three components of the temperature at each point we look in the sky," Borrill explains. "There is instrument noise. There are foreground sources of microwave radiation, such as dust. And finally there are the intrinsic variations in the temperature of the CMB -- which is what are we are trying to measure."

The observations made as the telescope sweeps across the sky -- 50 million observations for each of 16 channels at four frequencies, in the whole BOOMERANG dataset -- are not independent of one another, and the different kinds of information are related differently.

"Starting with millions of observations, we must separate out the different components," says Borrill. "Each of them is best expressed in its own distinct way -- but to express them jointly we need a common frame. Usually we choose the most manageable, which is the pixel domain -- in other words, we make a map."

Every one of the map's tens of thousands of pixels is made by combining information from hundreds of observations taken at different times throughout the balloon flight. In the resulting map it is easy to identify foreground sources such as quasars or the plane of the galaxy, and dust can be detected by its spectral signature, "which is why we make maps at various frequencies," Borrill says. Comparing observations made at different times improves the signal-to-noise ratio, but this is a computationally expensive operation.

Deriving the power spectrum from the map, the next major step in analysis, is even more challenging. The characteristic power of the microwave background at various angular scales must be determined.

"The idea is to ignore all the other stuff and find just the contribution of the cosmic microwave background," says Andrew Jaffe. "We have to reduce the thousands of pixels in the map to a dozen or so numbers, representing different points along the power spectrum curve, and see how they fit to curves characteristic of different models of the universe."

"The MADCAP program finds the power at each angular scale at each of these points along the curve," Borrill says. "We're asking what the CMB would look like on that patch of sky if the universe had such-and-such a shape and history." When the right curve is found, it allows astrophysicists to distinguish between competing models of the universe's origin, evolution, and present make-up. 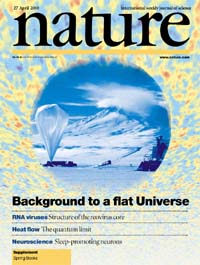 Although both map-making and power-spectrum derivation require comparing each pixel in the chosen dataset to every other pixel, in principle this only has to be done once to make a map, whereas it must be done a dozen times or more -- for each chosen point on the curve -- to derive the power spectrum.

"We are at the limit of what is manageable with today's algorithms on today's supercomputers," Borrill says. "It's a job that gets harder with each experiment."

Analysis of the BOOMERANG Antarctic flight data has produced an impressive degree of certainty about some of the most fundamental cosmic parameters. BOOMERANG's power spectrum of the CMB establishes that the universe is flat -- that its geometry is Euclidean, not curved.

Combined with other cosmological measurements, such as studies of distant supernovae by the Supernova Cosmology Project headquartered at Berkeley Lab, the BOOMERANG results support the emerging "concordance model" of a flat universe filled with dark energy -- dark energy that may correspond to the cosmological constant first proposed by Albert Einstein in 1917.

But datasets tens to hundreds of times bigger than BOOMERANG's will be produced by NASA's MAP satellite, to be launched later this year, and the European Space Agency's PLANCK, to be launched in 2007. For these massive datasets, new computational strategies will be necessary.

"We could make a very high-resolution map but analyze only a very small part of it, or" -- and this is the alternative Borrill plainly prefers -- "we could come up with better algorithms. Now that we have a method that works, we can test new ideas against it."

Borrill adds that "because of the power of our parallel machines and the depth of our experience with cosmic microwave background studies, NERSC is becoming the computing center of choice for analyzing CMB data from experiments all over the world. We want to maintain that status, but it will take hard work and fresh ideas."

The BOOMERANG results are reported in the April 27 issue of the journal Nature.